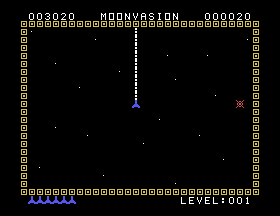 Moonvasion is an action game released by Moonbeam Software in 1982 for the TI-99/4A. Similar to the arcade game Space Zap, the game has players protecting a moon base from alien starfighters!

During the game, the player's ship is located at the center of the screen; it doesn't move from this position, but can be rotated to face any of the four sides of the screen. The enemy starfighters appear from the edges of the screen; player's need to quickly shoot them before they get close enough and launch an attack to destroy the player's ship. The location each starfighter approaches from is random so the the player will be requrired to rotate the ship ensuring it is facing the right direction. Starfighters appear in waves of 10; after the tenth fighter is destroyed, there's a bonus round begins where player's can earn points for destroying the mothership. During this round the player's ship moves from its usual location in the screen center over to the left side with the mother ship moving vertically along the right; there's a limited amount of time to fire and hit the mothership before the next, more difficult, attackwave begins. Points are earned in the game for shooting the various opponents; points vary depending on the current level with starfighters worth between 10 and 250 points and each mothership destroyed worth between 100 and 1500 points. The game ends when all ships in the player's squadron have been destroyed.