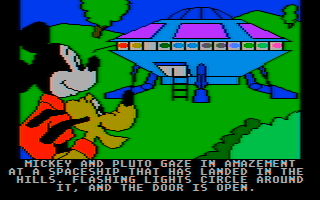 IBM PC version of Mickey's Space Adventure
Mickey's Space Adventure is an educational game for children ages 8 and up that was published by Sierra On-Line for the Apple II and Commodore 64 in 1984 and later for the TRS-80 Color Computer and IBM PC in 1986. In the game players control Mickey on a quest to find crystals that are hidden throughout the solar system. The game is designed to teach players about the nature of our solar system including the planets that make it up, their characteristics, and related science concepts such as gravity.

The story for Mickey's Space Adventure starts on the fictitious planet Oron which is located in the Alpha Centauri stellar system; an arch-criminal has broken into the Hall of Records and stolen a memory crystal which records the history of the planet. The crystal is broken up into 9 pieces and is now hidden in our solar system among the planets. In order to restore the memory of the planet's history, all the crystal fragments need to be collected and reassembled. The inhabitants of Oron build a computer controlled spaceship and send it to the Earth in order to find someone who can aid in collecting the crystals. As it happens, the spaceship lands near Mickey and Pluto who are out for a walk; the ship explains the situation, and the duo set out on a quest to collect all of the crystal fragments.

To locate the crystals, Mickey will be able to use the spaceship to fly to the various planets and moons in our solar system. The 9 crystals in the game need to be found and assembled in the correct order; clues are provided for the player as to which location players will need to visit next. Once the correct planet is identified and the spaceship has landed, players can explore the surface and will need to solve some puzzles in order to locate or reach the crystal. Players will also need to be mindfull of Mickey's air supply; while in the spacesuit on a planet surface, air is limited however it can be replenished by returning to the spaceship.

Mickey's Space Adventure doesn't use a text parser as was common in most of Sierra's other adventure games, instead it features a simple mechanism for building two word commands (such as "GO NORTH", "LOOK CRYSTAL", or "GET FOOD"). The game presents a limited selection of verbs on one line of text and then several nouns on the next line; players can choose one verb and one noun from the list by cycling through the available options with the spacebar and enter keys. The game will inform players if something impossible is selected and suggest better options.

The instruction manual for Mickey's Space Adventure additionally includes a series of suggested activities for parents to work on with their kids as well as a glossary of science terms which are used throughout the game's descriptions. 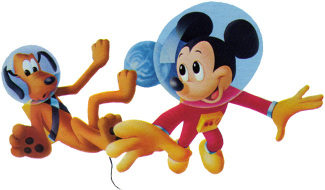 Product catalogs, magazines, flyers, or other documentation Mickey's Space Adventure has appeared in.
*Note: If you are unable to see any images in this section, you may have an ad blocker installed that is blocking the thumbnails and/or images.