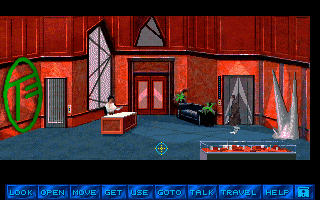 IBM MCGA/VGA version of Martian Memorandum
Martian Memorandum is an adventure game developed by Access Software and first released for IBM computers in 1991. It is the sequel to Mean Streets and was followed by another sequel, Under a Killing Moon. In the game players again take on the role of private investigator Tex Murphy with a new case of tracking down the missing daughter of a wealthy business tycoon. The game exclusively supported 256 color MCGA/VGA graphics and like other Access Software games included digitized sounds and speech through one of the supported sound cards or through the PC's internal speaker using their Realsound technology. Unlike previous Access Software titles which used digitized sounds for all sound effects and music, Martian Memorandum supported MIDI devices for music allowing longer themes and for the music to play in the background. The game features digitzed actors and a limited amount of video to provide a relatively realistic appearance.

Following Mean Streets, private investigator Tex Murphy is broke and desperately needs a new case to make ends meet. Fortunately, at the beginning of the game he is approached by Marshall Alexander, a wealthy business tycoon. Alexander's daughter has been kidnapped by someone unknown, and it is Tex's assignment to find her and return her safely. In addition, she has an "item" with her that is of great value to Alexander, however at the start it's unknown what, precisely, the item is. Like Mean Streets, Martian Memorandum takes place in a post-apocalyptic world where a nuclear war has destroyed much of Earth and left a large amount of radiation behind. This has caused the sky to turn red and many of the surviving people are mutants with various physical deformities. Tex will need to explore locations around the world to find clues, talk with suspects and witnesses, and eventually travel to Mars to unravel the mystery.

Martian Memorandum features a point and click interface to interact with the game. A series of verbs are located along the bottom of the screen which can be clicked on in order to build sentences that Tex will perform (e.g., pick up an item, talk to a character, move to a location). When interrogating other characters, players are presented with a choice of conversation lines. Choosing the right style of dialog can be crucial to getting information (and, in some cases, staying alive!). In some places in the game players will need to be careful to navigate Tex past traps, stay out of site of enemies to avoid being captured, and solve some puzzles quickly before time runs out. Unlike it's predecessor, Martian Memorandum doesn't include a full flight simulator and overall play is more similar to other adventure games of the era.