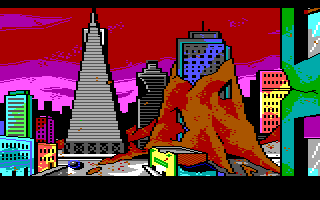 Manhunter 2: San Francisco is an adventure game released by Sierra On-Line in 1989. It is the sequel to Manhunter: New York and continues the story where it's predecessor left off. In the game, players again take on the role of an unnamed Manhunter in the year 2004 following the Orb Allliance invasion; as the game title implies, this time around the story takes place in a post-apocalyptic version of San Francisco.

In the year 2002 (at the time of the game's release, this seemed far in the future) the Orb Alliance invaded Earth and enslaved humanity. Two years later players, as one of the manhunters who are tasked with monitoring the remaining humans, destroy the orb home base in New York City. The serial killer Phil Cook, who has been working for the orbs and players were tracking, escapes and has traveled to San Francisco. While in pursuit a crash leaves the player stranded; another manhunter is killed by the crash and by taking on his identity players again need to find a way to track down Phil and defeat the orbs while maintaining the illusion of being a loyal manhunter working for them.

Like Manhunter: New York, Manhunter 2: San Francisco uses a modified version of Sierra's AGI interpreter; there are again a number of differences between Manhunter and typical AGI games. Instead of using a 3rd person view and a parser with typed commands, the game utilizes a 1st person view for most screens (action sequences and a few cutscenes excluded) along with a point-and-click interface in order to explore scenes, collect clues, and interact with the world. Dialog throughout the game is minimal; most of the storyline along with clues and puzzles are presented by the visuals instead of through dialog. The visual style of the previous game is maintained with settings taking place in real San Francisco locations with a dark and gritty appearance.

The story again spans several days and the gameplay mechanics remain similar to the previous game. Players have at their disposal a laptop computer called "MAD" (Manhunter Assignment Device) which allows tracking suspects and viewing a map to travel to locations. The MAD isn't available at the start of the game this time; players will need to acquire one, and in the process take on the identity of another, deceased manhunter. Using their stolen identity players will need to both track down Phil as well as perform tasks for the orbs to avoid arousing suspicion.

Players will likely have their character die often; There are many unfriendly characters encountered, environmental hazards, and several action sequences. Manhunter allows players to immediately go back to just before their death without having to restore a saved game and the game designers themselves will also appear to offer some hints. Game progress can also be saved so players can resume at a later time.

Manhunter 2: San Francisco ends with a cliffhanger indicating that a third game taking place in London was planned, however it never made it past the conceptual stage with the potential plot unknown.

Product catalogs, magazines, flyers, or other documentation Manhunter 2: San Francisco has appeared in.
*Note: If you are unable to see any images in this section, you may have an ad blocker installed that is blocking the thumbnails and/or images.