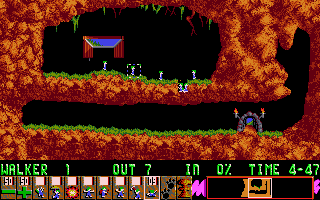 IBM VGA version of Lemmings
Lemmings is a puzzle game developed by DMA Design first released for the Amiga in 1991 by Psygnosis; it was later ported to numerous other computers systems and game consoles. The game was a huge success selling over 20 million copies between the various ports and has spawned numerous sequels and spin-offs. In the game players need to guide continuously walking green-haired lemmings safely to their goal; players can assign individual lemmings unique abilities to help avoid traps, get past tricky terrain, and dodge assorted obstacles on the way to the goal.

Each level in Lemmings begins with a trap door opening allowing a steady stream of lemmings to enter. Somewhere in the level is an exit door and players need to ensure the lemmings make it safely from the entry point to the exit. The lemmings walk in a straight line and will continue to do so unless forced to turn around by a wall or other obstacle; if there is anything dangerous in their path (a booby trap, a long fall, water, lava, and so on) the lemmings will walk straight into it. Players need to provide a safe path around such dangers by using special abilities on certain lemmings; for example, if there is a long fall ahead players can make one lemming a blocker so all of the following lemmings will be unable to walk straight off of the ledge. To complete a level, a designated percentage of the lemmings need to safely reach the exit.

The game screen in Lemmings has a series of icons along the bottom indicating each of the abilities that can be granted to a lemming along with the number of times the ability can be used. To give a lemming one of the abilities players can simply click on the desired icon to select it then click on one of the lemmings. The possible lemming abilities are as follows: There are also buttons to increase or decrease the speed lemmings enter the level (though you can't always adjust as slow as you might like) and a button to nuke all lemmings on the level. This button may be needed if you are stuck in a no win situation or it can be used to eliminate all of the blockers after other lemmings have reached safety.

The numerous levels included with Lemmings are broken up into several difficulty categores: fun, tricky, taxing, and mayhem. The game doesn't provide a means of saving progress to disk; instead, each time a level is started a password is provided which can be entered in to allow players to return back that point in the game.

A two player version of the game is included as well. In this version, the screen is split vertically and each player has their own set of lemmings to guide to an exit. There are two exits, and players compete to guide more lemmings to their own exit. The game starts with each player having 40 lemmings, and later levels the number of lemmings is dependent on how many were saved previously. The game continues until all 20 two player levels are completed or players fail to rescue any lemmings.

Product catalogs, magazines, flyers, or other documentation Lemmings has appeared in.
*Note: If you are unable to see any images in this section, you may have an ad blocker installed that is blocking the thumbnails and/or images.