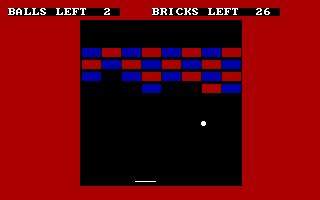 Knoxblox! for the IBM PCjr

Knoxblock! is a clone of Breakout written in IBM PCjr Cartridge BASIC. As in Breakout, players control a paddle which can move horizontally along the bottom of the screen. The goal is to destroy all 32 bricks along the top of the screen by hitting them with a bouncing ball. If players fail to keep the ball in play by hitting it with the paddle, it will be lost. The game begins with 3 balls in reserve and ends when all 3 balls are lost.