King's Quest II: Romancing the Throne is a 3D animated adventure game developed by Sierra On-Line and originally released in 1985. It is the second game in the King's Quest series, and like its predecessor is based on Sierra's AGI (Adventure Game Interpreter) game engine. In this installment in the series players control King Graham on a quest to find a wife who will be the queen of Daventry. 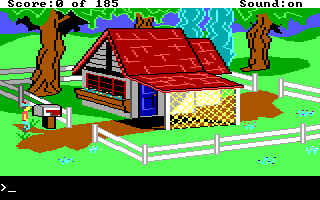 Tandy 1000 version of King's Quest II
Following the events of the first King's Quest game, Graham has become the king of Daventry. One day, looking into the magic mirror he sees a beautiful woman, Valanice, who has been imprisoned at the top of an ivory tower by the witch Hagatha. Enchanted by her, Graham is transported to the land of Kolyma and embarks on a quest to rescue her. To do so, he will need to locate three keys to unlock the three doors which keep Valanice imprisoned in the tower. Along the way, Graham will encounter various characters from myth and legend including King Neptune, Pegasus, a mermaid, Little Red Riding Hood, Dracula, and more. Some characters will help Graham, others are dangerous.

Similar to King's Quest, the world in King's Quest II consists of numerous individual screens the eventually wrap around; this allows players to continually travel north or south and eventually end up back where they started. Additionally, some parts of the quest bring players to unique locations including under the sea to meet King Neptune and to the center of a poisonous lake where Dracula resides. Many screens have dangers the player needs to avoid or find a way to safely navigate through.

The game utilizes Sierra's AGI game engine which provides an interface similar to that of King's Quest. Players can move their character, King Graham, around the screen by using a joystick or the keyboard. A text parser located along the bottom of the screen allows players to issue commands for Graham allowing him to examine surroundings or objects, interact with the environment, talk to other characters, and pick up or use items.

Product catalogs, magazines, flyers, or other documentation King's Quest II: Romancing the Throne has appeared in.
*Note: If you are unable to see any images in this section, you may have an ad blocker installed that is blocking the thumbnails and/or images. 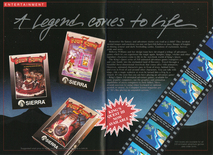