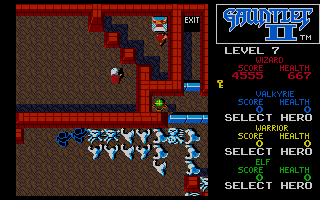 IBM MCGA/VGA version of Gauntlet II
Gauntlet II is an action/hack and slash dungeon crawl game originally released in arcades in 1986 and later ported to numerous home computers and game consoles. It was developed by Atari Games and is the direct sequel to Gauntlet. The gameplay in Gauntlet II remains mostly the same as the original with some minor changes and enchancements added. Up to four players can play at once with the goal of locating the exit in increasingly complex dungeons; numerous enemies and monsters are located throughout the dungeons and need to be attacked or avoided. The monsters and potions found in the original game return, along with some new monsters, potions, and abilities. While in the original game each player needed to select a different character, in Gauntlet II each player is represented with a different color allowing more than one player to choose the same character.

Gauntlet II features a top-down view of the maze-like dungeon. The goal of the game is to find one of the exits from each dungeon to continue on to the next, more difficult dungeon. Each player in the game begins with a limited amount of health and the character dies when the health counter reaches zero. The health counter reduces slowly over time essentially providing a time limit to the game; in addition, contact with enemies (or anything they fire) and other dangers will reduce health further. To avoid running out of health, players can collect food located throughout the dungeon which restores health slightly.

Each dungeon has a different layout and a maze-like route to get through it; additionally, unlike in the original Gauntlet, the dungeon orientation may change each time the game is played making the dungeon appear to be different. Throughout each dungeon are locked doors; to get through them, players will need to collect keys which are located throughout the dungeon. Some doors are necessary to open in order to reach the next level while others are optional; optional locked doors could lead to a shortcut, a bonus room, a trap, dead ends, or more. If players find themselves in a situation where they don't have enough keys to open all of the doors to reach an exit, it may still be possible to continue as walls in the maze will eventually turn to exits if the player waits long enough (however this takes a very long time, and players may not have enough health to last that long). Dungeons in Gauntlet II have a few new challenges as well; some walls may be invisible, walls can be magic and turn into monsters or bonuses when shot, the floor can contains stun tiles which prevent players from moving temporarily when stepped on, exits may temporarily be non-functional, some walls crubmle when shot, and more.

There are also numerous bonuses located throughout the dungeons: Treasure chests are scattered around each dungeon and provide bonus points, several different types of amulets provide players with temporary abilities such as invulnerability or increased firepower for a short period of time, and potions which can be used to destroy multiple monsters at once.

Each player in the game can choose a different character. In the original arcade game up to four players could play at once; Most home versions of the game also support this feature, however due to system limitations a few are limited to only two players at once (such as the Commodore 64 and ZX Spectrum versions). Players can attack enemies in hand-to-hand combat, with a long range attack, or with magic (Using magic first requires finding a magic potion bottle in the dungeon). While in the original Gauntlet each player had to choose a different character, Gauntlet II instead assigns each player a different color (Red, Blue, Green, or Yellow) which allows more than one player to choose the same character at the same time.

Each of the characters in the game has a different set of strengths and weaknesses; the available characters are: Blocking progress through the dungeons are large quantities of monsters. Many monsters are roaming about initially and additional ones are spawned by generators located throughout the dungeon (If a generator is destroyed, no new monsters will appear at that location). Monsters can be fought in either hand-to-hand combat, with a weapon, or with magic. Each monster has slightly different characteristics making one particular type of attack more effective than others against them. The monsters that will be encountered include the following:

Items in the Dungeons

Throughout each dungeon are various items that can be collected. The effect of each item varies, and sometimes collecting items is essential to completing a dungeon. Items that can be found are as follows:

Product catalogs, magazines, flyers, or other documentation Gauntlet II has appeared in.
*Note: If you are unable to see any images in this section, you may have an ad blocker installed that is blocking the thumbnails and/or images.