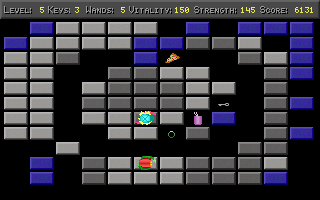 IBM VGA version of Freakin' Funky Fuzzballs
Freakin' Funky Fuzzballs is an action strategy game published by Sir-tech Software in 1990 for IBM and compatible computers. In the game players control a fuzzball with the goal of defeating the "enemy". To do so, players need to progress through increasingly difficult levels until the 15th level is reached where dynamite can be used to blow up the enemy and win the game.

The goal on each of the 15 levels in Freakin' Funky Fuzzballs is to locate enough keys or keycards to unlock the exit to the following level; depending on the level, multiple keys/keycards may be necessary. The game features a top down view of the world which consists of numerous tiles; initially, everything is hidden and can only be found by guiding the fuzzball and stepping on a tile. When stepped on the tile changes colors and if anything was hidden, it will then appear and can be picked up.

In constant pursuit are one (or sometimes more) crab-like enemies. Each time the player is caught by the enemy, some strength is lost. If the fuzzball loses all strength, the game is over. Initially, the maximum amount of strength a fuzzball can have is 100. One of the items that may be uncovered is a ring; for each ring picked up, the player's vitality improves which allows a higher maximum amount of strength. Strength can be replenished by picking up the various kinds of food that can be found. Players have limited defenses against the enemy; however, it is possible to pick up armor which will reduce the amount of damage done as well as a shield which prevents damage from a single attack.

On some levels, once a tile is stepped on it changes color once and that's it; On other levels each time a tile is stepped on it will change color and eventually disappear. This gives the player the potential to trap themselves with no further moves possible at which point the game will end. One these types of levels a magic wand will occasionally appear; if the player is able to pick it up before the enemy does it can be used later to create a single tile which may be enough to allow players to get out of a situation where they are trapped. On levels where the floor disappears the world will fit on a single screen; for other levels the world takes up more than one screen and players can move off of any side of the screen (or in some levels use a teleporter) to reach a different section. The levels are grouped together by different themes starting with medevial times and ending in the future; each themed section has several levels to it and they alternate between having tiles disappear or not.

Freakin' Funky Fuzzballs can be played by 1-10 players; in most variations players take turns attempting to solve the puzzles. If two players are playing the game, there is an option to compete head to head where one player controls the fuzzball and a second player controls the enemy. Additionally, standard and expert skill levels are available.

Product catalogs, magazines, flyers, or other documentation Freakin' Funky Fuzzballs has appeared in.
*Note: If you are unable to see any images in this section, you may have an ad blocker installed that is blocking the thumbnails and/or images.