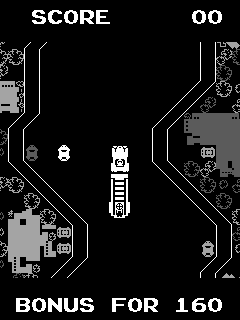 Fire Truck (also known as Smokey Joe for the single player version) is a simple arcade driving game released by Atari, Inc. in 1978. One of the earliest 2-player cooperative games, players control a fire truck with the goal of earning points by driving as far as possible without crashing.

Fire Truck features a top down view of a winding road with players controlling the titular fire truck. The object of the game is to earn points by driving as far as possible before running out of time (fuel). Players need to avoid crashing into the sides of the road or any obstacles in the way such as other cars; the road frequently changes direction, has various turns, or splits in two; when approaching particularly sharp curves, arrows in the road provide a warning of the impending hazard. There isn't a destination in the game that can be reached (such as a fire!), instead players simply try to earn the highest score they can. Players are able to crash the fire truck any number of times, and the game ends when the fire truck runs out of fuel. It was possible for gameplay to be extended by having bonus fuel awarded for crossing a point threshold; the number of points required varied depending on the game settings.

There were two versions of the game released; the first went by the title Fire Truck and featured a cockpit style cabinet where 2 players could play simultaneously. The first player would drive the fire engine and sat at the wheel at the front of the cabinet while the second player drove the hook and ladder and would operate a steering wheel standing behind the cabinet. The second version, titled Smokey Joe, only supported one player and was available in a more typical upright cabinet. During 1 player games (with either version) players can control either the fire engine or the hook and ladder with the other part being computer controlled. Players also have buttons to control a horn (player 1) and a bell (player 2) available, however these have no impact on the game other than making the corresponding sounds.