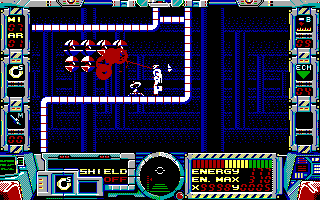 IBM PS/2 (MCGA) version of Fire Hawk
Fire Hawk: Thexder - The Second Contact is an action game originally released in Japan in 1989 by Game Arts for the MSX2 and PC-88 computers. It was later licensed by Sierra On-Line for release in the United States on IBM PC and compatible computers. It is the sequel to Thexder and features similar gameplay; players control a fighter robotic exoskeleton which is capable of transforming between jet and humanoid forms through 9 increasingly difficult levels.

An alien race known as the Nediam inhabit a giant ship resembling an asteroid and are heading straight towards Earth! Following the events in Thexder, mankind has created an improved version of the armored exoskeleton to prepare for an attack on the Nediam asteroid. The goal of the game is to penetrate the asteroid, destroy its defenses, and finally destroy the nerve center to halt the attack.

As in Thexder, players control a robot-like exoskeleton known as the Fire Hawk. The Fire Hawk has capabilities similar to Thexder and can transform between a humanoid form and jet form. As a humanoid, it can fire auto-targetting lasers. In jet form, the Fire Hawk can only fire directly ahead, however it is capable of flying to reach areas that can't be jumped to in humanoid form as well as fit through narrow passages. In either form, Fire Hawk also has new secondary weapons; these are available in limited quantity and can only be used after locating the appropriate power-up somewhere in one of the levels.

The items that can be located to power up the Fire Hawk are as follows: Different enemies have different defenses and armor; not all of the weapons will work (or work well) against all of the enemies.

Fire Hawk includes 9 different levels to complete, each one featuring a different theme corresponding to part of the Nediam asteroid's defenses or weapons. The levels in Fire Hawk are often maze-like and the path from the beginning to end may require some exploration. Additionally, there are sometimes hidden areas that can be found by shooting through otherwise solid looking walls (this is sometimes necessary to complete a level as well). While it's not required to visit every part of the level to complete it, exploring the full level is often desirable — weapon power-ups and energy replenishments are frequently hidden off of the main path. Later levels in the game can become difficult (if not impossible) if the Fire Hawk does not have sufficient energy reserves acquired in previous levels.

Product catalogs, magazines, flyers, or other documentation Fire Hawk: Thexder - The Second Contact has appeared in.
*Note: If you are unable to see any images in this section, you may have an ad blocker installed that is blocking the thumbnails and/or images.