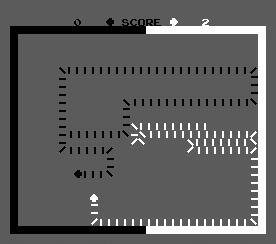 Dominos is an arcade game released by Atari in 1977. The game is very similar to the common Light Cycles concept popularized by TRON. In the game, each of two players control a device which continually moves forward leaving a trail of dominos behind it. The goal is to cause the other player to to crash into either a playfield wall or a dominos trail. Each time a player crashes, that players dominos topple and the surviving player earns a point; the first player to reach a set number of points (which is configurable by the operator) wins the game. On each turn, the domino device starts out moving slowly; the longer the match goes on, the faster the game becomes! Two players can compete against each other, or one player against the computer.

Product catalogs, magazines, flyers, or other documentation Dominos has appeared in.
*Note: If you are unable to see any images in this section, you may have an ad blocker installed that is blocking the thumbnails and/or images.