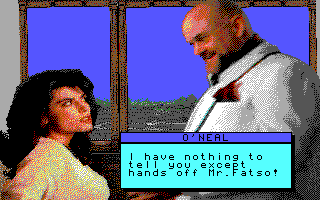 IBM EGA version of David Wolf: Secret Agent
David Wolf: Secret Agent is an action game combined with an interactive movie developed by Dynamix and released for IBM PC and compatible computers in 1989. The game story follows a James Bond inspired secret agent, David Wolf, as he uncovers a plot by the criminal orginization Viper. Mixed in with the story are four 3D action/simulator sequences which correspond to plot points in the story. The game features Dynamix VCR interface which allows players to play, fast forward, rewind, skip to particular parts of the story, and control settings such as text speed. The story can change slightly at several points depending success or failure during the action sequences. The game story is told with static images in a slide show like fashion that uses digitized photos of 16 live actors; other than as a result of performance during action sequences, players have little control over the story.

Players take on the role of David Wolf, a secret agent for the intelligence agency Peregrine. As the story opens, David Wolf is preparing to test a new hang glider. Agents for Viper, a criminial organization, soon arrive attempting to kill Wolf which leads into the first action sequence. Once safe, Wolf makes his way to Peregrine headquarters. Here he learns Viper is involved in a plot to use a stealth fighter to drop a nuclear bomb on Washington D.C. The planes designer, Dr. Kelly O'Neal, has been kidnapped, and initially the only clue is that a pilot, Garth Stock, has defected to Viper. Searching for further clues leads to the next action sequence, a car chase, where Wolf must escape from Viper agents that are in pursuit and finally arrives in a submarine. At this point Wolf has learned the stealth plane is being hidden on an island, Drax, from where it will be launched. While flying to Drax island, Garth Stock attempts to kill Wolf. As the pilot of the plane he rigs it to explode and jumps out leaving no additional parachutes. This leads to the third action sequence; in this part players need to guide wolf in free fall to catch up to Stock and steal his parachute. Once the parachute is secured, players then need to safely land on a moving truck to sneak in an airport secured by Viper. Here Wolf locates and rescues O'Neal and needs to steal the stealth plane. The final action sequence is piloting the plane safely off of the island and deliver it to Peregrine.

Several different endings are possible depending on how players complete the game. The best scenario occurs when players complete all action sequences in order and both Wolf and O'Neal survive. Alternate endings can occur if players skip a section or if they stop Vipers plot but either Wolf or O'Neal don't survive. And, of course, if players fail at any point the game can end with Viper succeeding in their plans. 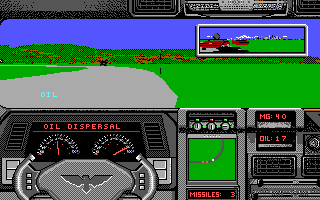 The driving action sequence (IBM EGA)
David Wolf: Secret Agent is broken up into story sequences and action sequences. During the story sequences players have little control; the story is presented as series of static slides with dialog boxes for character dialog. The slides are digitized photos of real actors and sets. Dynamix VCR interface is available throughout and can be used to fast forward or skip through the slides, however the story is predetermined and only alters based on a players performance in the action scenes. There are few minor exceptions where the player needs to interact with the story for it to continue; an example is prior to parachuting, the player needs to jump out of the plane before the bomb on board explodes.

The action scenes are 3D and play similar to many other driving games and flight simulators. There are four main sequences:

Product catalogs, magazines, flyers, or other documentation David Wolf: Secret Agent has appeared in.
*Note: If you are unable to see any images in this section, you may have an ad blocker installed that is blocking the thumbnails and/or images.