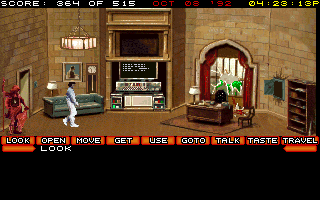 IBM MCGA/VGA version of Countdown
Countdown is an adventure game released by Access Software in 1990. In the game players take on the role of Mason Powers, a former CIA agent who has woken up in a Turkish mental hospital with amnesia with the goal of escaping and finding out what has happened. Players have a time limit to solve the story with certain actions (such as travel) using up time. The game uses a point and click interface to interact with the environment and talk with other characters. Countdown exclusively uses 256 color MCGA/VGA graphics with digitized photos of actors combined with hand painted scenery for its graphics. All of the sounds and music are digitized as well which can be played either through the PC speaker with Access Software's Realsound technology or through one of several supported sound cards.

The story and game begins in a Turkish mental hospital inside a locked room. Not much is clear at this point as Mason Powers, a former CIA agent and the stories protagonist, has amnesia. After escaping, the story progresses and small parts of the forgotten past are revealed via flashbacks. Accused of murdering his supervisor, Mason needs to find the clues to prove he's innocent and in the process uncovers a worldwide conspiracy.

Countdown uses a point and click interface to interact with the game. While exploring a location, a list of actions are listed at the bottom of the screen which can be clicked on to build up a sentence to perform an action. Clicking further on the desired object or person will complete the sentence. Conversations play a large part in the game; when talking with other characters, the list of actions becomes a style of statement or question that can be used (such as pleasant, bluff, hassle, or offer items). Different characters each respond according to their personality and players will need to use an appropriate line of questioning in order to obtain information or convince a character to help out. In some cases, choosing an inappropriate line of questioning can lead to the game ending. Players need to travel to numerous locations around the world to complete the game; travelling back and forth too often can use too much time so careful exploration of a location before leaving is often needed.

In several points throughout the game a top down view of a maze-like environment is used. Often in these segments of the game players will need to avoid being seen or captured; hiding behind objects or around corners is possible as well as exiting the maze into rooms for further exploration.

The game has a time limit of 96 hours of game time. Certain parts of the game use up time such as travelling or exploring and if time runs out the game is over. Players can die frequently in the game via other means also; this can be due to being caught by an enemy, following a poor line of questioning with certain characters, failing to solve certain puzzles within the given time limit, encountering hazards while exploring a scene, and more. It is possible to get into a situation where the game can't be completed in which case players will need to restore a saved game from as earlier point.

Product catalogs, magazines, flyers, or other documentation Countdown has appeared in.
*Note: If you are unable to see any images in this section, you may have an ad blocker installed that is blocking the thumbnails and/or images.