Perspective:
Behind view , Side View 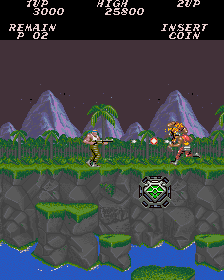 Contra (also released as Gryzor in Europe) is an action game originally released in arcades by Konami in 1986 and later ported to numerous home computers and consoles. As the Commandos Bill Rizer and Lance Bean, the goal is for players to survive each of the varying stages to defeat the terrorist organization known as Red Falcon. Contra was a huge commercial success with the arcade version becoming one of the top grossing coin-op games and the NES version often considered one of the best action games of the era. Several sequels, including Super Contra, were released as well.

Contra takes place in the future on a fictional base near New Zealand; the criminal Red Falcon Organization has devised a plot to wipe out humanity; the Earth Marine Corp's Contra Unit sends in two Commandos, Bill Rizer and Lance Bean, with the goal of destroying the enemy forces along with the alien entity that is controlling them. Each stage on the way to the final encounter is filled with deadly enemies both human and alien; armed initially only with a rifle and unlimited ammunition, players need to shoot, jump, and navigate their way through the convoluted base.

The game utilizes various perspectives; depending on the stage, the game may use either a side view with a scrolling or fixed screen, or a psuedo 3D view where players are moving “into” the screen. Players begin armed with a simple rifle; additional weapons can be acquired by destroying certain objects or enemies and picking up the capsules left behind. The exact weapons available can vary by version, but commonly include a machine gun, lasers, a rapid fire upgrade, and temporary invulnerability. On side view screens players can run, jump, or lie down on his stomach (to duck fire or shoot low targets); when jumping, the characters perform a somersault which allows players to continue firing in all directions even during the jump. On 3D screens, players can move and jump to the left or the right; moving forward will advance through the tunnels, but players need to ensure no obstacles or barriers are in the way first. These sections have a time limit with a life lost if time runs out. Most versions of the game allow two players simultaneously, although some are limited to either two players alternating or just a single player.

There are many differences between the versions of Contra for different platforms (some likely driven by technical limitations) including the number of stages present, the length and layout of the stages, the presence (or abscence) of between mission cut scenes, and more. A few of the differences that can be found include:

Product catalogs, magazines, flyers, or other documentation Contra has appeared in.
*Note: If you are unable to see any images in this section, you may have an ad blocker installed that is blocking the thumbnails and/or images.