Blueprint is an action/maze game first released in arcades by Bally/Miday in 1982 and later ported to the Atari 2600, Atari 5200, and Commodore 64. As J.J. the inventor, players need to locate all of the parts to a machine he designed in order to save his girlfriend, Daisy Damsel, from Ollie Ogre. The parts are hidden in houses scattered throughout the neighborhood, and players have a limited amount of time to locate them, assemble the machine, and stop Ollie!

The game screen in Blueprint consists of a maze-like neighborhood with 10 houses; Along the top of the screen Ollie Ogre is chasing J.J.'s girlfriend, and along the bottom of the screen is a blueprint of a machine, a start button, and the monster pit. To stop Ollie, players need to locate all of the parts for the machine, place them in the appropriate spot on the blueprint, press the start button, and then use the machine to shoot Ollie. When the machine is completed, it can be difficult to aim. The shots don't move straight up and instead curve randomly; some shots won't even reach the top of the screen, so it may take a combination of skill and luck to hit Ollie. If players fail to stop Ollie in the given time limit, a life is lost.

To find the 8 parts required to build the machine, players need to visit the houses. When a part is located, it can be dragged back to the blueprint. If the player enters a house which does not have a part (either one of two houses at the start, or a house where the part has already been picked up), then instead of bomb is acquired. The only place to drop or diffuse the bomb is in the pit in the lower right corner; players need to reach the pit and drop the bomb in before it explodes.

In addition to the bombs, there are several other dangers. Along the top of the screen are several flower pots; from time to time, a flower pot will fall and bounce around the screen. After it hits the bottom of the screen, the flower jumps away. If the player is hit by the pot or the flower, a life is lost. Hiding in the pit is Sneaky Pete; from time to time, Pete appears and makes his way towards the start button. If he successfully pushes the start button, all of the parts that are already in place fall off of the blueprint. To put the parts back, players need to first pick up Sneaky Pete and put him back in the pit. Once that's done, the machine parts can be put back into place. Lastly, on more difficult levels Fuzzy Wuzzy wanders the neighborhood. This fuzzy looking creature moves about randomly and will cost a life if players come into contact with it.

While players normally move around the screen slowly, there is also the ability to run fast by pressing the button. This ability is limited, however; once the available fast run time is depleted, players can only move about at normal speed until either the level is completed or a life is lost. Points are earned in the game for successfully diffusing a bomb in the monster pit, returning Sneaky Pete to the monster pit, locating a machine part, and for stopping Ollie with the completed machine.

Due to limitations of the system, the Atari 2600 version of the game has several changes as compared to the original and versions for other platforms. Both the flower pots and Sneaky Pete are missing from the game; the machine itself is a different shape and contains a different number of parts. Once the machine is completed, shots fired move slowly and straight upwards instead of the more random patterns as in other versions. To indicate how much fast run time is remaining, the entire maze changes colors instead of having an indicator bar: Normally, the town color is green. When players are low on fast run time the entire screen changes to yellow, and then finally the color changes to red when no fast run time remains.

The Commodore 64 version of the game renames some of the characters: Sneaky Pete is instead known as 'Weird Willie', and Fuzzy Wuzzy is called 'Maze Monster'. 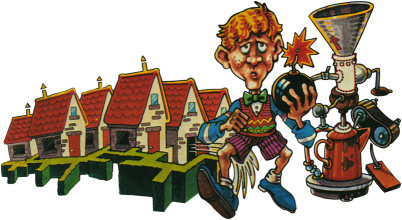 Product catalogs, magazines, flyers, or other documentation Blueprint has appeared in.
*Note: If you are unable to see any images in this section, you may have an ad blocker installed that is blocking the thumbnails and/or images.