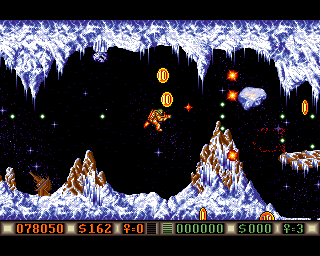 Blood Money is a side-scrolling shooter developed by DMA Design and published by Psygnosis. It was initially developed for the Amiga with versions for the Atari ST, IBM PC, and Commodore 64 to follow. The game features four different planets, each with a different theme, that players need to shoot their way through. Along the way money can be acquired by shooting certain opponents which can be used to unlock later levels and buy equipment upgrades.

Each of the four worlds in Blood Money has the player controlling a different vehicle: a helicopter in the metal world, a submarine in the underwater world, a spacesuit in the ice world, and a jet in the fire world. Players begin the game with a limited amount of firepower: only a single missile firing forward which can reach a limited distance forward. Additional weapons can be acquired by landing at one of the equipment centers; of course, upgrades cost money! After shooting certain enemies, money in the form of a spinning coin is left behind which will soon fall off of the screen. Players will earn the amount shown on the coin (either $10 or $25) if they pick it up before it disappears. Money earned can be used to purchase any of the available upgrades which are as follows:

Each time a life is lost, any upgrades purchased are lost as well. Each world also requires money to unlock: $100 for the first world, $200 for the second, $300 for the third, and $400 for the fourth. The worlds can be played in any order, however at the start of the game players are only provided $200 which is enough to select the first or second world. Once one of those two worlds is completed, players are awarded additional money for defeating the boss which is enough to select the third or fourth worlds as well.

Each world in the game is quite large. Most of the time, the screen scrolls horizontally from left to right, however in some sections the scrolling will temporarily shift to scrolling vertically upwards or downwards. The player's vessel can move anywhere within the screen and can face to the left or right. There are a wide variety of enemies that attack and the levels themselves feature varying terrain that get in the way. Especially on the third and fourth worlds, the path is sometimes very narrow and requires very careful navigation; occasional dead ends appear, although most of the time all of the paths can lead the player forward even if one is more difficult. Contact with any of the walls, enemy fire, and enemies themselves depletes the player's shield rapidly until the vessel is destroyed. Points are earned throughout the game for destroying opponents; players begin the game with three lives, and the game ends when all are lost (additional lives can be bought at the equipment centers and are not awarded for high scores).

Product catalogs, magazines, flyers, or other documentation Blood Money has appeared in.
*Note: If you are unable to see any images in this section, you may have an ad blocker installed that is blocking the thumbnails and/or images.