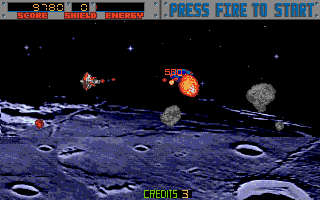 Blasteroids is an action game similar to Asteroids and is the third game in the series. As in it's predecessors, players control a ship with the goal of clearing the screen of numerous asteroids. This time around, the evil being Mukor is using the asteroids for protection; to defeat Mukor, players must clear all sectors (either 9 or 16 depending on the level) before fighting Mukor himself. The game expands on the Asteroids concept further by allowing two players to play at once and by adding additional ship transformations and power ups.

As in previous Asteroids games, players control a spaceship on a fixed screen which can rotate left or right, thrust, and fire forward. Thrusting gives the ship momentum; to change directions or stop movement players need to rotate and thrust in an opposite direction to counteract any movement the ship has. While in previous games players had a limited number of lives, in Blasteroids the ship instead has a limited amount of energy; thrusting, firing, and getting hit by asteroids reduces the energy level. The game ends when players have no energy left. It is possible to gain extra energy; after destroying some enemies and asteroids, a Power Crystal is left behind which awards energy if picked up.

Each galaxy in the game is broken up into either 9 or 16 sectors depending on the skill level selected. To achieve the ultimate goal of defeating Mukor, players need to visit each sector and destroy all asteroids. In addition to the asteroids, some sectors also have various types of enemy UFO's and other opponents; however, to complete a sector, it's only necessary to destroy the asteroids. Once all sectors are cleared, Mukor appears and players need to defeat it by destroying all of the tentacles. Once that task is completed, a few bonus items are awarded and the game continues on to the next, more difficult galaxy.

The player's ship has the ability to transform into three variations:

By default the ship is equipped with a blaster to fire forward and a limited amount of energy. Destroying certain enemies or asteroids can release a bonus item which provides additional capabilities as well. Items that can be found include the following:

Blasteroids optionally allows two players to play at once; this also provides the ability for the two ships to lock together as one with a Warrior ship as the base allowing movement control and a speeder acting as a turret.

Product catalogs, magazines, flyers, or other documentation Blasteroids has appeared in.
*Note: If you are unable to see any images in this section, you may have an ad blocker installed that is blocking the thumbnails and/or images.