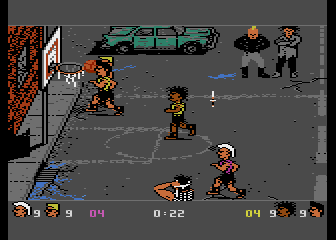 BasketBrawl is a basketball simulation published by Atari Corporation for the Atari 7800 and Atari Lynx. One or two players can choose to play games of either one-on-one or two-on-two; the game features the additional twist of players being able to punch and fight each other along with a knife-throwing referee.

In attempt to stop inner-city gang wars, a basketball league was formed by the city leaders. The hope was a friendly game of basketball would be a better way to settle disputes and make the city peaceful; this turned out to be wrong, and the result was BasketBrawl!

The game resembles a basketball simulation mixed with a fighting game; similar to many other basketball simulations of the era players are presented with a scrolling screen of the basketball court. There are three possible locations for each game: a junkyard, a street, or a rooftop. The goal is to earn the most points in the given time limit; the game partially follows typical basketball rules, however there are no 3-point shots and the typical penalties of the sport are not enforced. Instead, players have the ability to punch other players to attempt to steal the ball or simply knock them out and the referee is on the sidelines constantly throwing knives.

There are six different characters (ten in the Lynx version) available, each of which have a different set of strengths and weaknesses such as speed, power, shooting ability, and more. Additionally, power-ups occasionally appear on the court throughout the game which, when picked up, temporarily grant the player improved stats. The power-ups that can be found are:

Each time players win a game, they proceed to face a new team. The game ends when a player loses or is knocked out. Points are earned in the game for making a basket, punching other players, picking up power-ups, and winning a game.