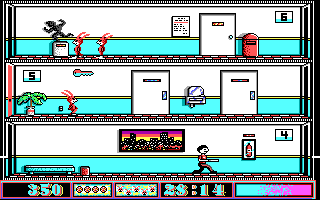 IBM EGA version of Avoid the Noid
Avoid the Noid is an action game designed as a promotion for Domino's Pizza. The game is based on the late 1980's Domino's advertising campaigns featuring a character known as "The Noid". The Noid attempts to destroy pizzas before they can be delivered; the player's goal is to avoid The Noid and successfully deliver a pizza in 30 minutes or less.

The goal of the game is to deliver a pizza to Doom Industries which is located on the top floor of an apartment building. The building is viewed from the side with three floors visible on each screen. The player needs to traverse the floors while avoiding multiple Noids as well as numerous traps (including trap doors) that are set. The Noid's can knock the player over and stomp on the pizza, or may fire weapons such as pizza destroying rockets. To avoid the dangers, the player can walk, run, jump, duck, or use one of a limited amount of Noid avoiders that clear noids from the screen.

To reach a new floor, the player needs to take an elevator located on the side of the screen. The player begins each screen on the bottom left, needs to run right to the second level, left to the third, and then right again. Occasionally, elevators are locked and a key or 3 digit code needs to be located to open it. Keys and codes are hidden in the scenery such as phones on the wall.

The player begins the game with a limited number of pizzas; if the Noid destroys all of the pizzas, the game is over.