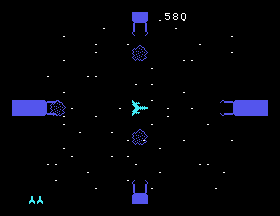 Astromania is an action game released by Moonbeam Software in 1982 for the TI-99/4A. It is written for the TI Extended BASIC module and consists of four different stages of gameplay. The goal is to earn as many points as possible by successfully completing each stage. The stages of the game are as follows:

If all four stages are completed, the game repeats with increased difficulty. Players begin the game with ten lives, and the game will keep repeating until all lives are lost.