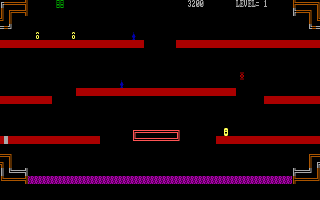 Ario Bros. for the IBM PC
Ario Bros. is an action/platform game that is essentially a clone of Mario Bros. using ASCII graphics. The goal of the game remains the same as in Mario Bros.; players need to eliminate all of the pests on each level by first hitting the platform below them to flip the pest onto its back and then kick it off of the platform. The screen consists of multiple platforms with pipes at the top left/right and bottom left/right of the screen; the pests appear from one of the pipes at the top and make their way towards a pipe at the bottom. Once a pest enters the bottom pipe it will reappear at the top again.

Pests come in several varieties; some can be flipped with a single hit, some take two hits, and some jump up and down and can only be flipped while they are touching the ground. Anytime a player is caught by a pest, a life is lost; In addition to pests, there are also fireballs that appear and bounce around the screen and will also cost a life if it hits the player. In the center of the screen on the lowest level is a "POW" button; if the player jumps and hits this, all pests on the screen will be flipped over. It is limited in use, however, and after it's used too many times will disappear.

Points are earned in the game for each pest eliminated. Additionally, after a pest is kicked off of the platform a coin will appear; collecting the coin earns additional points. Each time all of the pests are cleared, the proceeds to the next, more difficult level; the game ends when players have lost all of their lives by colliding with either pests or the fireballs.