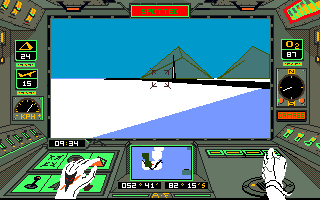 Arcticfox is a futuristic 3-D tank simulation developed by Dynamix and first published for the Amiga by Electronic Arts in 1986 and soon after ported to other platforms. It is a sequel to Dynamix earlier game Stellar 7 and features similar gameplay where players are in command of a tank with the goal of destroying a wide variety of enemies.

Arcticfox takes place in the year 2005 (at the time of the game's release, this was seemingly far in the future). Aliens have landed on Earth and established a base in Antarctica; there they have set up a series of oxygen converters to transform the Earth's atmosphere into one more suitable for themselves. As the pilot of a new experimental supertank, the Arcticfox, players have the goal of penetrating the alien defenses and destroying their base before the Earth becomes uninhabitable.

The game features a 1st-person viewpoint from the cockpit of the Arcticfox showing the main viewscreen along with some of the tank's controls including radar, weapons remaining, an oxygen meter, compass, damage indicators, and more. The goal of the game is to penetrate the enemy force field surround Antarctica and destroy all targets including oxygen converters, radar stations, communication forts, and their main base. The area within the force field is well guarded; the enemy has numerous tanks, planes, rocket launchers, mines, and other weaponry awaiting. Each enemy type has different characteristics; some types are slow due to heavy armor which makes them easier targets but tough to destroy while lighter craft take fewer shots but are faster moving targets.

The Arcticfox has several types of weapons and defenses available. The main canon is the most common weapon and can be fired forward an unlimited number of times (however, only a couple of shots can be in the gameplay area at a time so players need to wait a bit if fired too rapidly). The canon ordinarily fires paralell to the ground, however the inclination can be adjusted to target airborne targets. A limited number of mines are available which can be dropped from the back of the Arcticfox wherever the player chooses; the mines are live, so players need to be sure not to run over a mine themselves! Mines also self detonate after a set amount of time regardless of if an opponent is near. The last weapon is the guided missile; when fired, the player's view switches from that of the Arcticfox to the camera on the missile allowing it to be controlled. The Arcticfox is equipped with shields for defense. Each time the Arcticfox sustains damage the shield is depleted and the game ends when no reserve shield remains. The last ability the Arcticfox has for defense is the ability to dig into snowy terrain; this is effective at hiding from enemies but blocks all views except radar and limits firing ability to guided missiles only.

The terrain in the arctic is varied and can either for or against the player depending on the terrain type and the player's strategic skills. There are ridges which can provide a convenient vantage point, crevices which need to be avoided as they will destroy the Arcticfox, rocks which can be used for cover, tundra fields which slow down both the player and enemy ground vehicles, mud flats which make the Arcticfox behave more unpredictably and tend to slide, and more. Weather can be a factor too; blizards may appear from time to time which can result in a partial loss of vision for both the player and the enemy (radar will still function in this case, however).