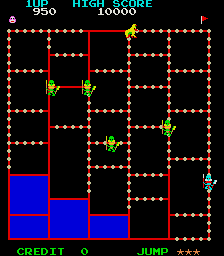 Amidar is an action game developed by Konami and first released in arcades in 1981 before being ported to a few home systems. The goal of the game is to fill-in all sections of a maze by walking around the complete border for each section while avoiding the various opponents.

The game screen in Amidar consists of a maze which creates a serious of boxes that need to be filled-in. To fill-in a section, players need to walk around the complete border; to complete each level in the game, the entire maze needs to be traversed which will fill-in the entire board. Numerous enemies are also in the maze, and if players are caught a life is lost.

Amidar features two types of levels; on odd numbered levels, players control a gorilla pursued by wild warriors. On even numbered levels, players control a paint roller while being chased by pigs. While overall the gameplay is the same on each level type, there are few minor differences. On the gorilla levels, if all four corners are filled in the warriors will temporarily turn into chickens. The chickens can run faster than the gorilla, and bonus points are awarded for each chicken caught. On levels with the paint roller, players can only move a limited distance on the grid before paint runs out; when this happens, additional sections of the maze can't be filled in and any sections that are incomplete will disappear. To replenish the paint players can move the roller either to an already completed section of the maze or to the level starting location. In addition to the two main level types which alternate, there are also bonus rounds between each level providing an opportunity to earn even more points.

Regardless of the level, all of the opponents in the game move in a predetermined pattern referred to as “Amidar Movement”; opponents begin at the top of the screen and make their way towards the bottom of the screen and will take each horizontal turn that is possible. Since the opponents move faster than the player, the predictable movements can help players avoid them. There are no completely safe spaces on the screen and eventually an opponent will reach each part of the maze. In addition to the regular opponents, each level features a “Tracer”; the tracer follows a different pattern and simply patrols the border of the playfield. If players take too long to complete a level, the Tracer will eventually leave the border and pursue the player directly. Besides simply avoiding opponents, players also have a “jump” button; pressing the jump button doesn't cause the player to jump, but rather every opponent on the screen will. This can provide a brief moment for players to escape by walking beneath the opponents while they are in the air. This jump button is limited to four uses per life.

The game becomes more difficult each time a level is completed by having more and faster opponents, more complex maze layouts, and less time until the Tracer begins pursuit. Bonus lives are awarded at certain point thesholds, and the game ends when players have no remaining lives.

Product catalogs, magazines, flyers, or other documentation Amidar has appeared in.
*Note: If you are unable to see any images in this section, you may have an ad blocker installed that is blocking the thumbnails and/or images.