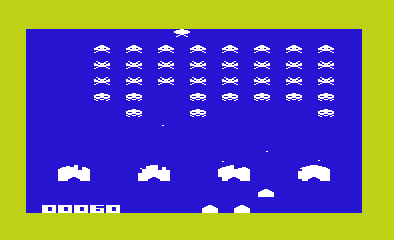 Alien Blitz for the Commodore VIC-20

Alien Blitz is a clone of Space Invaders for the Commodore VIC-20 first released in 1981 by UMI. Gameplay remains essentially the same with players defending earth from wave after wave of alien invaders.

Players control a missile base which can move horizontally along the bottom of the screen; five rows of bomb dropping aliens are approaching and players need to shoot them all before they land. If players are hit by a bomb the missile base is destroyed; the game ends when players have no remaining missile bases or the aliens land. During the game the aliens continously march left or right; each time they reach the end of the screen, the entire formation drops one level closer to the ground and reverses direction. Additionally, as players shoot the aliens and fewer remain they speed up. Just above the missle base are four shields; these block both the player's shots as well as the aliens and can be used for defense. Each time a shield is hit by fire a small piece is removed so over time they provide less and less protection. Should the aliens reach a low enough level the shields disappears entirely. From time to time, a UFO will fly across the top of the screen; the UFO is harmless, but can be shot for bonus points.

Points are awarded in Alien Blitz for each alien shot and for shooting the UFO; more points are awarded for aliens in the higher rows than lower ones, and UFO point values are random. A bonus missile base is awarded after 1000 points are earned. 10 skill levels are available which affect the game speed and difficulty.