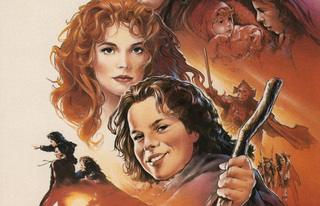 Not many people remember the movie Willow these days it seems, and perhaps for good reason; in retrospect, it was rather mediocre. Despite some big names associated, it was met with mixed reviews when it came out and time hasn't helped its cause. Still, at the time, I was young and absolutely adored the film regardless of any shortcomings; so when Mindscape came out with their computer adaptation of the movie I immediately plunked down my hard earned cash. Unfortunately, while the movie may had some redeeming qualities even if it's not a cinematic masterpiece (it does have a cult following), the game does not; I bought the IBM PC version, but that doesn't matter too much. All of the versions have, more or less, the same gameplay and same faults. 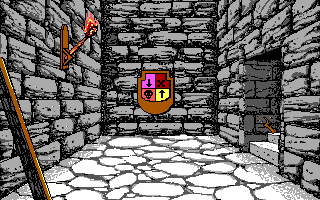 If you're not familiar with the game (which is likely!), let me first provide a brief overview. The game attempts to capture some key story elements as either action oriented or puzzle oriented mini-games; there are seven in total, and to win you need to complete all seven in the same order as the corresponding event would have occured in the movie. The story has a sci-fi/fantasy style; You have your unexpected hero, Willow Ufgood, who has just started dabling in magic and is suddenly thrust into an adventure where he defeats an evil sorceress and saves the day! It may not be the most inspirational or original of stories you've seen or read, but you've still got a nice array of fantasy genre elements and special effects that while laughable by today's standards were pretty impressive for the 80's. The filmmakers had probably envisioned something more along the lines of what Peter Jackson later accomplished with Lord of the Rings but it just failed to materialize due to relatively limited special effect capabilities and an average script. Overall, the game uses a typical movie game formula of taking select scenes from the movie and individually turning them into some type of game, each with a different goal and style. You take on the role of several characters from the film depending on the scene. There is also an option to skip around to individual scenes to practice them before attempting the complete series. The game had the potential to work; Indeed, if the individual sequences had been more fun and loading delays weren't an issue, it could have even worked well! However, things don't pan out both due to technological limitations and some bad design decisions.

Let's start out with the design decisions. I found the most frustrating aspect to be how randomness enters into your chances of success. Many of the sequences in the game have a random element to them in the form of mazes with unexpected dead ends and spells to be cast that vary and can cause instant death if cast wrong. The problem here is there's really nothing you can do about this as a player; it's purely a guessing game with the solution discovered by trial and error. No clues are provided, so simple chance can end the game or allow you to continue. To win, you need to play all seven mini-games in order; you begin with eight lives, which while it sounds generous isn't as many as you think. In several sequences you need to make decisions with no opportunity of correcting mistakes; in the dungeons at the beginning of the game a wrong move has you locked in the dungeon and a life lost. There's no visual cues; one would think looking through an open door before walking into the room would be possible, but alas, it isn't. At the crossroads, you literally have a 50/50 chance of making the right choice; if you're unlucky, a life is lost! In the ice caverns, there's no clues or indication of what the correct path is; trial and error only will get you to the end. The overall premise isn't bad, the 3D view of the dungeon and ice caverns, for example, could be fun with modern technology and where some sort of hint could prevent instant death, but what the game actually presents is nothing more than a guessing game where winning feels more like luck than skill. To actually win the full game, practicing individual sequences was necessary; the game didn't reset the mazes or spells each time you attempted a sequence so it was possible to figure out the solution by repeating a section over over again. The solution was the same for both practice and the full game, and the solution wasn't altered unless players selected the option to reset the game. To get through all sections you would, realistically, have to keep practicing until you stumbled across the solution and then hopefully remember it (or write it down...) to complete the puzzle in the full game. 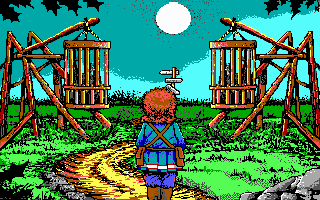 Some elements of the game could be forgivable if the technology was better (actually, it also feels like the technology could have been better even at the time). The biggest issue with the game technology-wise is the loading times. They are long! This issue is compounded by frequency; everytime you lose a life, the game has to reload the sequence you're playing. This can lead to the frustrating scenario where you do nothing but click once with the mouse and then wait for what feels like an eternity to load again! The spellcasting parts of the game are the worst in this regard; the goal is to transform Fin Raziel back into a human. To do so, you need to select a specific series of three icons out of thirteen. If you choose a wrong icon, a life is lost. If you choose a correct icon, but the sequence is wrong you end up with a bizarre and incorrect transformation, and at the end a life is still lost. The icons necessary and their sequence is random and you need to discover it simply by trial and error. This premise can be frustrating by itself, but each time you select a wrong icon the entire sequence needs to reload! This leads to the typical gameplay process of waiting...waiting...waiting...clicking on one icon (which is wrong), and waiting...waiting...waiting to see the graphic showing that you're wrong, then finally waiting...waiting...waiting... for the whole section to load again so it can be repeated. It's not a great puzzle, and the delays make it tedious at best. The loading times are an issue with every version, not just the IBM PC version I had played at the time; even the more advanced platforms such as the Amiga are slow. The poor Commodore 64 version, however, is easily the worst. The Commodore 1541 disk drive was never known for being speedy, and in this game it's downright hideous. Additionally, in other versions, there's a digitized image from the movie along with text describing the story and/or the goal of a sequence that is shown while the game loads which at least connects the dots between parts of the game. With the Commodore 64 version, however, these are absent (likely due to limitations of the system). The text at least makes the game make sense; without it, there is no apparent relation between the mini-games and the tie-in to the movie is vague. This definitely makes the game more bearable and its absence in the C64 version seriously hurts it.

Graphically, the game is ok. Everything is clear enough to be playable, the detail is decent enough, but there are some limitations. The PC versions supports, in the best mode, 16 colors with either EGA or Tandy modes. The color isn't always great, but with the fixed 16 RGBi colors available it's not the worst either. The Atari ST and Amiga versions are more or less based on the IBM EGA graphics; despite the better color capabilities of these computers when compared with EGA, they use the same artwork but with a slightly modified palette. In one respect, the EGA version actually looks better; the light red color is used as a closest to skin color shade available. For the ST and Amiga, this is replaced with a much redder version that looks quite aweful. I'm not sure why this decision was made, much better choices were possible! The Amiga version does use the system's extra colors, however, to display more detailed versions of the photos making it easily the best platform the game was released on; but otherwise, all of the other in-game graphics are the same as the other versions. The 4-color CGA version might not be pretty, but surprisingly it does remain clear enough that the limited colors are rarely an issue (one exception is during battle where the characters disappear into the background a little too much). Of course, the Commodore 64 version is blockier and no matter what version you have, the animation is choppy.

Soundwise, however, this game is especially bad! An IBM PC (and any compatible) with just the PC Speaker as sound hardware doesn't provide much opportunity for amazing sound and music. With these hardware limitations, it's hard to fault an unimpressive result! The theme song is there, a few sound effects are present, and not much else which was common for the PC sound era. More could have been done, but oh well, it's just the PC speaker! Where this game really dissapoints is with the more advanced systems like the Amiga and Atari ST (and even the Commodore 64's SID chip). The music on these systems is still just single voice; no harmony or varied instrumentation. The tonal quality is much better than the PC speaker provides and is a little more pleasing and less harsh on the ears than the square wave a PC gives you, but considering what these computers are truly capable of the result is disappointing at best. Sound effects are still limited, and again while better than the PC version, completely fail to show off what could be done. Oh well...at least there's a volume control! 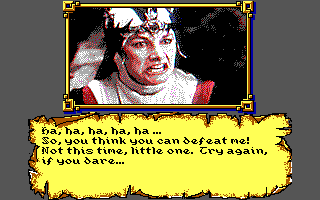 This review came about as an experiment in putting down a few thoughts about the game as I went through the exercise of capturing some screenshots. When the game came out, I was determined; indeed I spent far too many hours trying to win for no readily apparent reason! It was far from my favorite game at the time, and looking back it's only gotten worse. Ah well. I'm planning on this not being the only review added to PixelatedArcade with many more to come as time allows! As with everything, I'm still playing around with the format a bit and how to make things work better. I'd also like to include a rating for each game reviewed, and I think the school grade letter system will work nicely (i.e. A being the best score and F being the worst). For Willow, I'm going to give it a solid D...
Return to News index