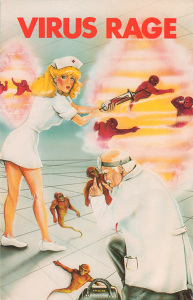 As of this writing, the COVID-19 pandemic is spreading with everything from sporting events to concerts being cancelled or re-scheduled and it's recommended you stay in, avoid crowds, and so forth. So, why not take the opportunity to review an obscure, appropriately themed IBM PC game? For this mini-review I'm inviting you take a look at Virus Rage which was published by Fantasy Research, Inc. in 1983! The game is rather tough to find and I'm sure sold few copies so there's a pretty good chance you've never heard of it. As an early IBM PC action game the technical limitations can make it a little frustrating to play, but the idea is decent enough and it can even be fun to try out for a while.

First, though, a quick overview of Virus Rage; the goal of the game is to save a patient suffering from a viral infection. The screen consists of a series of cells (shown as circles) with the magenta colored cells representing the mutant, viral ones. As the game is played, the infection spreads and the viral cells slowly expand and fill the playfield. There are also one or more active nuclei on the playfield which is the source of the infection. In order to complete a level, each nucleus needs to be destroyed. This can only be done indirectly, however; players need to destroy all of the viral cells surrounding each of the nuclei since shooting the nucleus itself will result in a lost life. Once all surrounding cells are gone, the nucleus will just whither and die. To make things more challenging, there are mutants (which look like stick figure people) that turn any cells they come into contact with into the viral form and also chase the player causing a life to be lost on contact; spores are also generated sometimes to attack the player. Players control a syringe which can move in four directions into any of the open spaces (or spaces with dead cells) and can fire bullets to destroy the viral cells, mutants, and spores. There are 30 levels total, each with a different initial configuration, that increase in speed and difficulty. 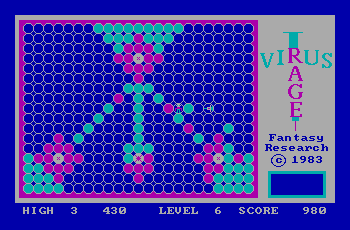 Is Virus Rage fun to play? By 1983 IBM PC standards I'd say it's about average with some control limitations causing the biggest problems. The concept isn't bad, and could actually be quite fun. The instructions included with the game are limited, but once you figure out how to play the idea works well and with 30 levels there is plenty of variety. Only the PC speaker was available at the time, so sounds are limited but as PC speaker sounds go the results are pretty good. Where the game doesn't work spectacularly is the controls; you can use a joystick or the keyboard, but neither worked well for me. The response is rather sluggish adding unnecessary difficulty to an action game. To fire, you have to both push the button and move the joystick in the direction you want to fire; it would have been a nice addition if you could also just fire in the direction the syringe is already facing, as I found it too easy to accidentally jump forward when I didn't intend to. The graphics aren't bad for a 1983 PC game, but can be troublesome at times; animation has some mild flicker to it and is choppy as the player and mutants simply jump from cell to cell instead of being smoothly animated. The bubble-like playfield, while it looks good, can also obscure obstacles; I got caught several times by mutants I didn't even notice as they don't stand out enough. The spores are worse, as they flicker far more and really blend into the pattern. The game does include a demo which is actually more helpful for learning the game than the printed instructions, and a practice mode lets you jump to any of the 30 levels (without that, I can't imagine ever seeing the later ones).

Overall, I'll give Virus Rage a C. If you're stuck inside due to the coronavirus and want to check out an early 80's curiosity, see if you can find this one; maybe it's not the most memorable or spectaclular game, but it is fun to play for a bit. I wish the controls had worked better, as that's easily the worst aspect and without that issue the game would have been far better. The CGA graphics are decent, though I would have liked the mutants and even the player's syringe to stand out more; for me, it was too easy to lose track of track of things for just a short moment which is long enough to be fatal (especially on later levels). Action games on the IBM PC were certainly difficult to do well given the hardware that was available, and for 1983 this is an interesting attempt.