The Ads You Want to See! 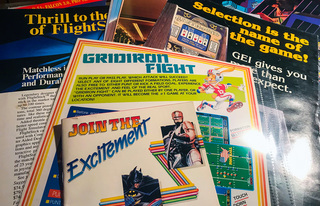 Advertisements are a part of video game history; viewing flyers, magazine ads, product catalogs, and so on can provide a lot of insight into what the market was like at the time. Sometimes the artwork was amazing and worth preserving just by itself, but perhaps more often the results are ridiculous and very much a product of the era and provide amusement only in an MST3K fashion. Either way, it's noteworthy! We've been adding scans of numerous advertisements to games here at PixelatedArcade; nearly 1000 have been posted as of this writing, with many more to come! One issue, however, can occur if you're using an ad blocker (such Adblock Plus). If you click on the link for any of the advertisements scans on PixelatedArcade (or similarly, if you don't even see the icon images to click on underneath the heading...) and it appears the link is broken, it may just be your ad blocker doing it's job a little too well! I've tried to code the site such that this isn't an issue, but there are a variety of ad blockers and other variables out there so I'm not 100% certain your configuration won't cause images to be blocked. If you're interested in the classic ads and they're not showing, please whitelist PixelatedArcade and then you should be able to see the images. I hate advertising as much as you do, and since the site is being run just for the fun of it and an interest in classic videogames, there are no other annoying ads for providing revenue so I hope you'll feel confident doing so.

This issue, btw, is not unique to PixelatedArcade and occurs on other sites; MobyGames, for example, has also been collecting scans of various flyers and advertisements, and you may notice what at first seems like a mysteriously blank page if you click on the link for their scans. On closer inspection, the link works and it's just an ad blocker not understanding the difference between an ad you want to see and one you don't!