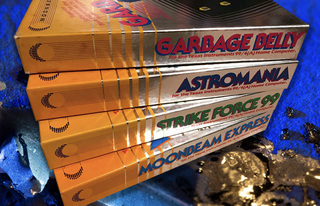 To start off 2020, I just pushed live the first code update of the year! There's always a lot of work going on behind the scenes, even though it may not always be immediately visible. For this update a number of minor bug fixes are included such as layout tweaks, especially to improve pages on mobile devices. There are also some new features that are still in the works even if there isn't a completed version that has been released at this time. A new feature that did make it, and was long overdue, is the ability to tag games that are, in some abstract way, related. An example of this is the mysteriously named CGA “More Color” mode. The name came from the California Games video selection menu option; although it wasn't the first game to use the technique, it probably did it the best, and I couldn't come up with a better name so More Color it is. Things are a bit sparse at the moment, but the plan is to add a lot more over time as I think of different ways games can be grouped, sliced, and diced. Some small improvements were also added to the layout of the package contents section of releases. For some games, when possible, the “Releases” tab also includes a list of everything included in the box for a given release (and when available, a scan or photo of the item). Like everything here, more is being added all of the time. Thanks for checking out PixelatedArcade, we're excited about 2020 and all of the classic gaming fun it holds!