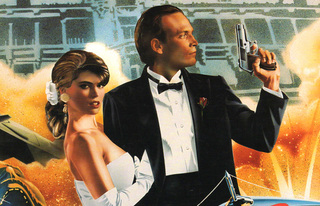 Back in the late 1980's, a small company from Eugene, Oregon known as Dynamix was working on ways to bring more narative and a more cinematic quality to their games. One of their first self-published titles, alongside A-10 Tank Killer, was the half 3D simulator / half James Bond movie mish-mash David Wolf: Secret Agent. This oddball game was a bit ambitious for the time, especially for a quasi-small company; Billed as an “Interactive Movie”, the game's attempt to mix action and story (with live actors) was an interesting experiment. However, despite a few nice ideas and a decent enough high-level concept, the ultimate combination is rather disappointing. 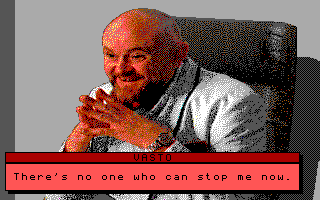 The story for the game is essentially a James Bond movie clone; as secret agent David Wolf, players need to stop the terrorist organization Viper who are plotting to detonate a bomb in Washington D.C. To accomplish this, they have stolen a top secret stealth fighter along with the plane's chief designer, Dr. Kelly O'Neal. The game uses still photographs of real actors and sets and even has an opening where the actor names for each character are shown rather than the programmer/developer credits. This overall probably gives the game about as much of a cinematic feel as would be realistic with average hardware at the time. Control over the story is very limited, though; thanks to Dynamix' VCR interface, players can move forward and backwards at will with controls that resemble VCR buttons, and there are even a few minor branches based on how well a player does in an action sequence, but for the most part the story is linear. There's no dialog selection, decisions to make, or any other way to influence the story (so, not particularly interactive for an “Interactive Movie”). Dialog is often brief and cheesy; the game attempts to have a serious and suspensful story with a little bit of humor injected here and there, but never really succeeds at either. Part of the problem is limitations of the format; with a relatively (by modern standards) course resolution of 320x200 only so much text can appear on the screen at once without obscuring the digitzed images too much. This forces text to be brief, or players will need to press a key too often to advance forward; the game attempts to balance the need for detail with the need for brevity but what it ends up with is kind of a bland, generic story where quick phrases are prefered over any kind of narative detail. Ok, part of that is probably the writers fault, but being forced into a limited format doesn't help things all that much.

When the game isn't advancing the story with the static images and text, there are four different 3D simulations where players take control. The graphics use Dynamix 3-Space engine and strike a nice balance between detail and needing to run on slower computers and in with either only 16 or 4 colors (3D technology on slow computers was essentially the origin of Dynamix, so they had a pretty decent background to draw upon here). And while the action sequences technically aren't too bad, they are brief and are more like just a few simplistic, unsatisfying mini-games. The sequence makes sense (or, at least as much sense as a cheesy spy-flick adventure can make); you start out testing a prototype hanglider only to have to utilize it in a combat situation, move on to the classic jumping out of an airplane without a parachute scenario, driving a few fast cars as fast as you can, and end with stealing (er...taking back) the experimental jet. The variety is nice, but some (or all) of the individual sequences feel simplistic and limited compared to other games that focus on the particular genre. Other games, of course, didn't include the digitized images and all, but each individual action sequence felt like there was another game it could be compared to and invariably the other game dedicated to the particular simulation did better. The driving sequence, for example, isn't bad per se, and is even one of the better sequences, but compared with the Test Drive games (which had already been released at this point) it felt a little lacking and incomplete for what a driving game at the time seemed like it could achieve. 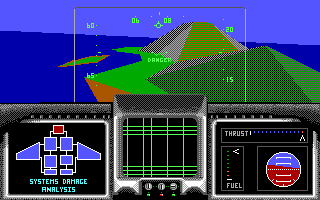 While there are plenty of aspects one may find limiting about the game, the music and sounds are easily one of the worst in my opinion. No matter what optional sound hardware you may have (Roland MT-32, AdLib, and Tandy are supported), only the PC internal speaker is used for sound effects. While this mix of utilizing sound cards for music and the internal speaker for effects wasn't unusual at the time, it was always disappointing. The sound effects present are ok and fairly typical for the PC speaker, so I guess from that aspect it could have been worse. The music, however, is another story. Depending on where you are in the game, the music and pacing attempts to change to (sort of) match what's going on. No matter which theme is playing, however, it ends up just sort of droning on and doesn't take long to become aggrivating. Only one instrument is used: piano (or, something that might almost sound like a piano depending on your hardware). No percussion, no horns, no strings, and not even any synth sounds; just the piano. The complete lack of variation makes the music extra tiresome and lends to it not providing any drama, atmosphere, or interest to the game. With a Roland MT-32, the default piano sound used is decent enough, especially for PC games at the time. If you are using an AdLib (or compatible) card, however, then things get a little worse! The default FM synthesis piano sound used by the AdLib card has more of a metalic “bong” quality to it than that of a piano sound. Given the limitations of the OPL2 FM chip in the AdLib card you can't criticize the lack of realism too harshly. But for this particular case, it's just one more thing to add to the aggrivation that is the soundtrack. By having just the one sound by itself throughout the entire game it seems to just draw attention to the limitations, makes the music get on your nerves faster, and really fails to take advantage of how good an AdLib card could sound with a little more care. At the time the game came out, sound cards were still relatively new and expensive. As they still weren't particularly widespread, I get the impression the developers put in as minimal an amount of effort as possible and essentially treat the supported sound cards as nothing more than a multi-voice PC speaker (fortunately, later Dynamix games greatly improved on this).

David Wolf: Secret Agent is quite memorable for its quirky attempt and mixing an original story into an action game in a way that hadn't really been done before. Gameplay wise, it definitely falls short; you can get through everything rather quickly, probably in an hour or two, with the help of the VCR interface. The story ends up being rather generic, and the action sequences are average. Hardware limitations of the era certainly limited what was possible with the concept; the 5.25" disk version was already on 10 disks, so adding more digitized screens, action scenes, or any other details may have quickly grown that further into the realm of untenable. The still frames are technically good (for 16 colors) however, like the story, the “acting” isn't always great. I'm guessing the budget to hire a dedicated, skilled writing team, an experienced director/photographer, and/or actors was simply beyond what a small-ish company like Dynamix (and the market) could afford at the time. I do suggest checking it out as it's an interesting experiment from the era, but it's not that fun to play so probably won't be one anybody would stick with for very long. Overall, I'll rate it a C-. It probably deserves a worse rating, but I think the developers deserve some credit for attempting to push games further and create new concepts even if things never really came together.

The Missing 256 Color and Amiga Versions

David Wolf: Secret Agent supports, at best, 16 colors in 320x200 resolution which, at the time, was available with an EGA card or on a Tandy 1000. The Dynamix installation program, however, has two visible yet disabled options for MCGA and VGA 320x200 with 256 colors. There's no way to select either of these options, and indeed the game doesn't include 256 color graphics. Since the installation program also detects the player's hardware and greys out options that the game supports but the player's computer doesn't have available in exactly the same manner, it definitely gives the impression that the game does support MCGA or VGA but the program's auto detection isn't working. I'm sure I wasn't the only one frustrated by this, and it probably also led to the rumors that such a version exists. Some of the magazine advertisements for the game mention in small text at the bottom that there was to be a 256 color VGA version and an Amiga version released shortly; neither ever appeared. While these non-existant versions would not have improved the gameplay and story issues at all, the graphics would have been great to see. The digitized photographs would have looked spectacular in VGA, and while I wouldn't be surprised if the Amiga version that was planned would have used only 32 colors similar to other Sierra/Dynamix games, it would have been a natural for the quirky HAM mode which allows up to 4096 colors and works better with static images than animation. It is also noteworthy that, amazingly, the 4 color CGA graphics are actually quite good; while the colors aren't particularly pleasing, the digitized images are clear and the 3D action sequences are distinct enough that there's never a feeling that you lost because of ambiguous graphics. This is probably about as good as one could expect for CGA graphics.

I've never found a confirmed reason these were axed, but I can only guess that sales were poor enough that justifying any more time and effort didn't seem worth it; not long after the game was released, Sierra On-Line acquired Dynamix and that likely had a huge impact on the company's priorities as well. I've also never found any prototype or evidence work had even begun on additional versions; finding either this or behind the scenes materials, photographs, and anything additional at all if it exists would be interesting for sure.