There are 349 games documented on PixelatedArcade supporting AdLib Music Synthesizer for IBM PC/Compatibles.
(View for All Systems)
AdLib Music Synthesizer is part of the category Sound Hardware Supported.
The AdLib Music Synthesizer Card is a sound card that was introduced in 1987 by Canada based AdLib, Inc. The card was initially marketed as a tool for music composition, and a year later was supported by Sierra's King's Quest IV showing it was viable for music and sound effects in games. The AdLib card was the company's most successful product and the first PC add-on sound card to achieve widespread game developer support. The AdLib card featured FM synthesis based on the Yamaha YM3812 (OPL2) chip which could produce up to 11 simultaneous sounds (either 9 channels of sound, or 6 channels of sound with 5 percussive instruments).

The AdLib card was later followed up with the AdLib Gold in 1992, however by this time Creative Labs' Sound Blaster had gained extensive market share and the AdLib Gold wasn't successful.

Product catalogs, magazines, flyers, or other documentation AdLib Music Synthesizer has appeared in.
*Note: If you are unable to see any images in this section, you may have an ad blocker installed that is blocking the thumbnails and/or images. 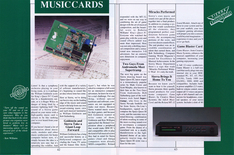