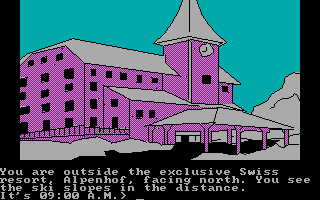 IBM PC version of Alpine Encounter
You have 12 hours to stop VODAC world domination. VODAC, an international crime syndicate, is suspected to be behind a crime of taking an ancient and priceless Chinese vase that is scheduled to tour the United States this month. The search for the vase is centered on a luxurious ski resort in the Swiss Alps. U.S.-Chinese relations could completely break down if the vase isn't recovered. An intercepted radio transmission leads to suspicion that the vase is located at the Alpenhof Ski Resort.

This game is a graphics adventure game. Interaction with the game is text-based; graphics are displayed that coincide with interactive text commands that are typed to advance the game play.

Product catalogs, magazines, flyers, or other documentation The Alpine Encounter has appeared in.
*Note: If you are unable to see any images in this section, you may have an ad blocker installed that is blocking the thumbnails and/or images.