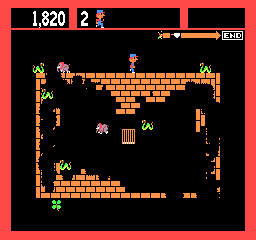 Zoo Keeper is an arcade game released by Taito America Corporation in 1983. In the game players control Zeke the zoo keeper; the animals in the zoo are running wild, and Zeke's girlfriend, Zelda, has been captured! Players control Zeke with the goal of recapturing as many animals as possible and then rescuing Zelda.

Zoo Keeper is broken up into two types of playfields which alternate before ending in a final bonus round; once the player completes all of the screens the game then repeats with a higher level of difficulty.

In the first playfield Zeke runs along the perimeter of the zoo; as he runs, bricks are added to the wall which has various animals contained. The animals are attempting to escape and constantly destroy sections of the wall; if any animals make it outside the enclosure, Zeke needs to avoid contact with them or a life is lost. From time to time, a net will appear; if Zeke picks up the net he will be able to use it to capture animals and put them back into the enclosure. The net only lasts a limited time; once time runs out, it will disappear and Zeke will again need to avoid the animals. The goal on this level is to survive for a given amount of time; a timer on the screen indicates remaining time and the level ends when it runs out. Bonus points are awarded for any animals still inside the enclosure at the end of the level.

The third and final playfield again has Zelda at the top of the screen with Zeke attempting to rescue her. There are two levels of platforms connected by escalators that players need to climb up to finally reach Zelda. On each platform there is a cage which releases a herd of charging animals that players need to jump over or a life is lost.

Points are earned in the game for jumping over animals, recapturing animals, collecting bonus items, rescuing Zelda, and for completing stages.