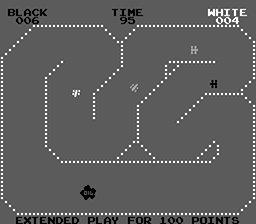 Sprint 2 arcade screenshot
Sprint 2 is an arcade racing game released by Kee Games in 1976. The game features a top down view of 1 of 12 different race tracks and can be played by one or two players. The goal is to drive around the track as many times as possible within the given time limit; the further a player drives, the more points are earned. There are always four racers on the track; two of the racers (colored grey) are always controlled by the computer, the black racer is computer controlled in one player games or by player two in two player games, and the white racer is player one. The 12 tracks available can be selected when starting a game and feature a variety of shapes and difficulties. Each track additionally has one or more oil slicks; driving through an oil slick will cause the player's car to spin out of control for a while, usually resulting in a crash into the wall. Player's can crash an unlimited amount of times (into the wall or other cars), however each crash can take up precious time.

Product catalogs, magazines, flyers, or other documentation Sprint 2 has appeared in.
*Note: If you are unable to see any images in this section, you may have an ad blocker installed that is blocking the thumbnails and/or images.