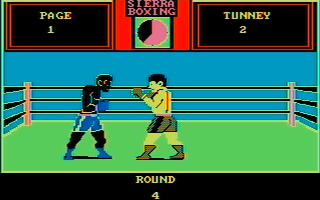 Sierra Championship Boxing is a boxing game developed by Evryware and published by Sierra On-Line. The game features a mix of strategy and action and allows players to create their own boxer before heading to the ring.

The game begins with players setting up their boxers. Included are numerous real life boxers, or players can create their own from scratch by selecting a character type (black, white, cartoon, or a kangaroo) and then setting numerous stats (including age, height, weight, reach, and more). Once players have a boxer, the fight begins. Sierra Championship Boxing includes three modes of play: one or two players can compete by controlling the boxer's every move in an action/arcade game style, they can act as a coach and advise the boxer of a strategy and allow the computer to perform the actual fight, or the fight can be completelly computer controlled. Other fight parameters can be adjusted as well, such as the time per round, number of rounds, and scoring system used.

Product catalogs, magazines, flyers, or other documentation Sierra Championship Boxing has appeared in.
*Note: If you are unable to see any images in this section, you may have an ad blocker installed that is blocking the thumbnails and/or images.