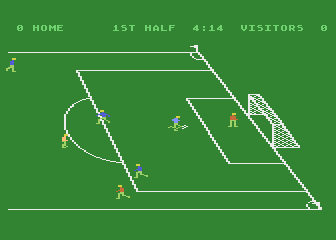 Atari 5200 version of RealSports Soccer
RealSports Soccer (originally released as just "Soccer") is an action game which simulates the popular sport. It was originally released by Atari in 1982 for the Atari 5200 and ported to the Atari 2600 a year later. The game features an overhead view of the field which scrolls horizontally to follow the location of the ball. Players control one player at a time on the team while the computer controls the remaining team members (the goalie is always controlled by the computer as well). For the team that currently has the ball, the player with the ball is controlled. Otherwise, the currently controlled player can be selected from any team member. Two players can play against each other or one player can play against the computer; with the latter option several skill levels are available, and the length of time for each game can be adjusted as well.