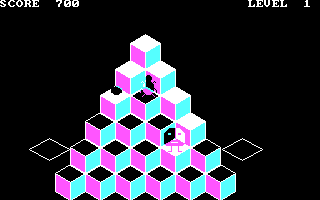 IBM PC version of Pyramid Power
Pyramid Power is a simplified clone of the game Q*bert. As in Q*bert, the goal of the game is to change all of the blocks in a pyramid from their original color into a target color. To change a block color, players need to guide their character to jump on each one. If players succeed in jumping on all 21 cubes in the pyramid, the game continues to the next level. Points are earned in the game for each block that is changed to the target color as well as a bonus for completing a level.

To make the game challenging, there are two types of dangers (rocks and a bug-like creature) found on the pyramid that need to be avoided. The rocks are similar to the red ball in Q*bert; they appear at the very top of the pyramid and randomly bounce downwards. Once a rock falls off the bottom of the pyramid a new one appears at the top to take its place. The creature is always present on the pyramid and it constantly follows the player; it can move in any direction and is not restricted to falling downwards like the rocks. There's no way to defeat it, however towards the bottom of the pyramid are two platforms to either side. The platforms can be used to temporarily evade the creature by jumping on one which will take the player to the top of the pyramid. The platforms can be used as often as needed, however 100 points are subtracted each time.

Unlike Q*bert and many other clones, Pyramid Power provides only one life for players. If the player is caught by the creature, hit by a rock, or jumps off of the side of the pyramid the game is over.