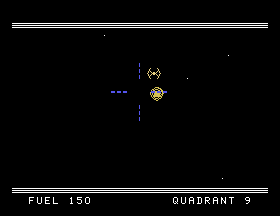 Moonbeam Express for the TI-99/4A

Moonbeam Express is an action game released by Moonbeam Software in 1982 for the TI-99/4A. As captain of a cargo vessel, players are tasked with defending 9 quadrants from enemy fighters arriving from a neighboring galaxy. The cargo vessel is slower and less maneuverable than the enemy fighters, but it has more firepower; it is also the only vessel in range to stop the enemy fleet before it's too late!

The game begins in quadrant 0 with the player's ship having 10,000 units of fuel; the goal is to clear each of the 9 quadrants of all enemy fighters. A first person view from the cockpit of the ship is utilized (similar to Atari's Star Raiders) allowing players to target and fire at enemy fighters as they appear. When in range, enemies will fire back; the players vessel can absorb some damage, but too much and the game is over. During combat a short range scanner can be activated which shows the current quadrant and the location of all enemies within the quadrant. Enemy fighters aren't the only danger; from time to time, asteroids may be encountered which either need to be avoided or destroyed. When they are ready to move on to another sector (this can be done at any time and doesn't require first destroying all enemies in the current sector), players can activate the ships computer. The computer display features a chart of each of the 9 sectors indicating how many enemy fighters remain, the amount of fuel required for travel, and the location of refueling stations. Travel between sectors doesn't need to be sequential, sectors can be visited in any order however more fuel is required for travelling to sectors that are further away.

The game ends successfully if all enemies in all quadrants are destroyed; players will be forced to abort the mission if their vessel runs out of fuel or is damaged too much by enemy fire. When the game is over, players are given a ranking based on how many enemies are destroyed, the number of enemies remaining, and shots fired. There are five possible ranks which are Commander, Captain, Warrior, Pilot, and Space Monkey.