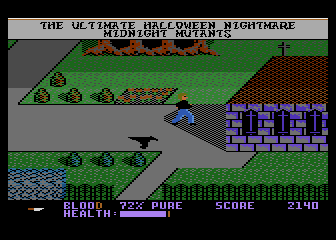 Midnight Mutants for the Atari 7800
Midnight Mutants is an action/adventure game released for the Atari 7800 in 1990. The game features the likeness of Al Lewis as “Grampa” (from the t.v. series The Munsters); in the game players control Jimmy Harkman with the goal of rescuing Grampa who has been imprisoned in a pumpkin by the villain Dr. Evil. The game features a large game environment to explore with puzzles to solve along the way, numerous enemies, and several boss battles. A pseudo-isometric viewpoint is used and players are able to freely roam the entire game world, however some areas are difficult if not impossible to reach without first acquiring certain items. Midnight Mutants was one of the last games to be comercially released for the Atari 7800.

On Halloween night back in 1747, Dr. Evil was burned at the stake by Johnathon Harkman, an ancestor of the game's protagonist Jimmy Harkman. Now, on Halloween night in 1992, Dr. Evil has returned and as revenge has imprisoned Jimmy's grandfather (known as ”Grampa”) in a pumpkin! Players control Jimmy who has set out on a quest to defeat Dr. Evil and save Grampa.

Midnight Mutants takes place in a large game world with numerous locations to visit; there are ten locations overall (including a mansion, church, cabin, graveyard, pirate ship, and more) as well as fields, forests, and other pathways that connect them all together. Many of the areas are large and and the screen scrolls to follow the player's location. Due to Dr. Evil's infuence, numerous monsters will be encountered in most locations including zombies, werewolves, deadly crows, and much more. Initially, Jimmy has no defense against the creatures and must simply avoid them. Hidden in several locations are weapons Jimmy can acquire including a knife, axe, and gun. While players are able to explore anywhere in the game world from the start, some areas are much easier to pass through after one of the weapons is acquired, and additionally the several large, mutant bosses can't be defeated without them.

Jimmy has two life meters, one indicating health and the other for blood purity. Contact with many of the creatures will reduce the health meter, while other creatures are poisonous and will reduce blood purity. If either of these meters reaches 0, the game is over. Restoring health and blood purity is possible; there are certain items hidden throughout the game world or released after defeating enemies which will heal and potions can be picked up for use by the player at any point.

Midnight Mutants doesn't have any mechanism to save games (such as a password or battery backed RAM); each time player's play the game they will need to start the adventure from the beginning. While the game does provide a score (points are earned for destroying the various monsters and for locating items), the ultimate goal of the game is to destroy all of the mutant bosses and then finally defeat Dr. Evil.