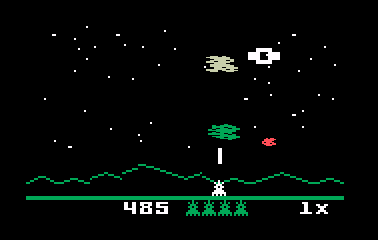 Intellivision version of Astrosmash
Astrosmash (also known as Astroblast on the Atari 2600) is an action game originally developed for the Intellivision and released in 1981. It was shortly after ported to the Atari 2600 and Mattel Aquarius systems. It is an action/shooter style game that resembles a mix of Asteroids and Space Invaders. In the game players attempt to earn as many points as possible by shooting a barrage of incoming meteors, bombs, and UFO's. Astrosmash was one of the most successful games for the Intellivision with over one million copies sold; by late 1982 it had replaced Las Vegas Poker & Blackjack as the game that shipped with the Intellivision Master Component.

In Astrosmash players control a laser cannon which can move horizontally along the bottom of the screen. The laser cannon can fire shots vertically to destroy the various (and dangerous) objects that bombard the player. Additionally, it has the ability to enter hyperspace which instantly transports it to another part of the screen. This feature can be used to get out of a tough situation, however the location players end up is random so it's not always guaranteed to be a safer location. Players begin with a limited number of lives, and a life is lost each time the laser cannon is hit by any of the incoming objects. The game ends when all lives are lost. The goal of Astrosmash is to earn the highest score possible.

On each level of the game numerous meteors of different sizes and colors head towards the player rapidly which need to be shot. When a meteor is destroyed points are earned; if any meteors make it past the player then points are lost. Some meteors can be destroyed with a single hit, while others are split into two smaller meteors when shot.

In addition to the meteors, there are several other dangers which appear from time to time. First are white, spinning bombs called spinners. Spinners are come in two sizes and all of them must be shot; if any spinners make it past the player then a life is lost. On more difficult levels guided missiles appear and will activily seek out the player's laser cannon. They can be shot, however if they make it low enough on the screen they'll be out of reach of the laser cannon; If this happens the player's only defense is to use hyperspace and hope it tranports the laser canon out of the way. Lastly are UFO's; they travel horizontally across the screen and can be shot for bonus points. UFO's drop slow moving bombs that can't be destroyed but should usually be easy to dodge.

In Astrosmash points are earned for shooting the various objects that appear. Points are lost each time a meteor makes it past the player or a life is lost. Each time a certain point threshold is reached the game advances to the next, more difficult level (and the screen background changes color). Since points can be lost, it's also possible for players to fall back to an earlier level. On higher levels there are more targets, the speed increases, more spinners and UFO's appear, and point values gained or lost increase. Every time the player's peak score increases by 1000 points an extra life is awarded.

Product catalogs, magazines, flyers, or other documentation Astrosmash has appeared in.
*Note: If you are unable to see any images in this section, you may have an ad blocker installed that is blocking the thumbnails and/or images.