Lunar Lander is an arcade game released by Atari in 1979 which simulates a lander attempting to land safely on the moon. Player's control the landers thruster and rotation and need to orient the craft above a safe location and land the it softly on the surface; landing too quickly or landing on the rough terrain will destroy the lander. At the time of the games release Atari didn't release any sequels or ports of the game (emulated versions have since been released for modern systems), however the Lunar Landar concept has been used by numerous games with the first versions having appeared on mainframes and early computers prior to Atari's version and later many clones and variations developed for home computers and consoles by other companies. Lunar Lander was Atari's first game with vector graphics.

Lunar Lander presents players with a side view of a ragged landscape; there are a few, small flat areas where it is safe to land (these are indicated with point values). Players control a lunar landing module and need to safely reach one of the landing areas before running out of fuel. The lander begins in the upper part of the screen; to navigate, players have two buttons to rotate the lander either left or right and a lever which adjusts the thrusters to counteract gravity. Use of the thrusters depletes the fuel supply, so players need to be careful to not run out or the lander crashes. The lander remains more or less in the center of the screen with the terrain scrolling to follow the player's movement; as the lander approaches the ground, it will also zoom in to provide a more detailed view. If the player finds themselves in an emergency, there is an abort button which automatically rotates the lander to the vertical position and fires the thrusters at full force; this, however, uses a large amount of fuel so if players have little remaining a crash may still be be inevitable.

To land safely, players need to ensure their speed is not too fast and the lander is upgright; at the top of the screen the game displays the landers altitude, horizontal speed, and vertical speed to help players determine if they're falling too fast. After a successful landing the game repeats with a new set of terrain and the lander starting with the remaining fuel.

While Lunar Lander doesn't have a time limit, players are essentially limited by the amount of fuel the lander has; when fuel runs out the lander will no longer respond to the controls and will promptly crash. The game allows additional fuel to be bought at any time by inserting additional quarters. The game includes four difficulty levels players can choose from; some settings can be adjusted by the operator, such as the amount of a fuel a quarter buys. 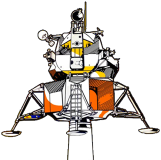