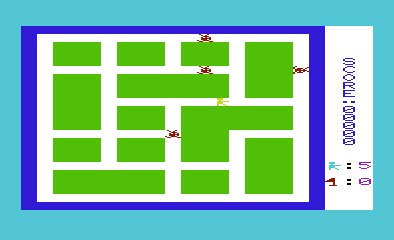 Commodore VIC-20 version of The Alien
The Alien is an action game released by United Microware Industries in 1981. In the game players take on the role of The Alien trapped in a maze with many dangerous creatures. The object of the game is to capture the alien creatures that are wandering about without being caught. Players are equipped with an unlimited number of traps that can be placed anywhere in the maze. If one of the creatures wanders into the trap, it will become stuck. Players then need to deflate the trap before the creature escapes. If players don't deflate the trap fast enough and the creature is able to escape, it will become panicked and run around the maze more quickly. Once all of the creatures in a maze have been captured, the game continues on the next, more difficult level. For each creature captured, players earn between 100 and 1000 points. Players begin the game with 5 lives and the game ends when all lives have been lost due to coming in contact with a creature.

Product catalogs, magazines, flyers, or other documentation The Alien has appeared in.
*Note: If you are unable to see any images in this section, you may have an ad blocker installed that is blocking the thumbnails and/or images.